Sefer Altan, 73, who has 5 children and 11 grandchildren living in Istanbul, had a stent implanted in his heart 3 years ago.

The old man, who then had pacemaker surgery, recently started experiencing shortness of breath and insomnia. Sefer Altan, who came to the hospital for routine control, was found to have a 9.5 centimeter aortic aneurysm in the abdomen.

In the face of this situation that surprised even the doctors, Altan was taken to a risky operation. Sefer Altan, who recovered as a result of finding veins from both groin areas and closing the aneurysm with a special material, said, “Hodja, ‘you are carrying a dangerous bomb on your lap’. But I trusted Turkish physicians, ”he said.

Drawing attention to the risks and seriousness of the operation, Istinye University Hospital Medical Park Gaziosmanpaşa Hospital Cardiovascular Surgery Specialist Assoc. Dr. Mustafa Bilgi Erdogan said, “The diameter of the aortic vein in the abdomen is approximately 2.5 centimeters. The risk of rupture increases, especially when it reaches 5.5 centimeters. At Sefer Bey, we encountered a very large 9.5 centimeter aneurysm. The onset of aneurysm was very close to the renal vein, a situation we encountered very rarely, ”he said.

“I HAVE ALWAYS TRUSTED IN TURKISH DOCTORS”

Explaining that he could not breathe and got tired quickly before the operation, Sefer Altan said, “I was tired very quickly during the walk. The situation was noticed when I came to the hospital for a general check-up. Hodja said, ‘You are carrying a dangerous bomb in your arms.’ They said, ‘We will do an operation’ and I survived. I’ve had bypass surgery before. Then they inserted batteries from heart failure. “I have always trusted Turkish physicians”.

Emine Alpdağ, daughter of Altan, explained that her father had difficulty in breathing and climbing stairs and said, “My father was breathing hoarsely while he was breathing, he was getting tired quickly while climbing the stairs. Even though he went fast even though he was tired, his breathing was forcing him. We were attributing these to a normal heart disease. We thought nothing would happen. When we came for a routine examination, aortic vascular swelling was detected on ultrasound. The first remark of the teacher was ‘you are carrying a bomb in your arms’. We were very anxious and scared. Because it was a very risky surgery. They said it was risky whether you went home or had surgery. We took the risk of treatment. Good thing we got it, my father is very good now ”.

“A HIGHLY BIG AND RARE SITUATION WE SEE”

Explaining that aortic aneurysms are frequently seen in patients with advanced age and risk factors, Assoc. Dr. Mustafa Bilgi Erdogan, “The situation where the aortic vessel in the abdomen becomes a life-threatening situation as a result of its expansion and ballooning beyond its normal diameter. The diameter of the aortic vessel in the abdomen averages 2.5 centimeters. Since the risk of tearing increases especially when it reaches 5.5 centimeters, we recommend either surgery or a closed method. Our patient, Sefer, was an aneurysm that was detected by chance when he came to us. As a result of the tomography performed for another illness of the patient, we encountered a very large aneurysm of approximately 9.5 centimeters. The onset of the aneurysm was also very close to the renal vein. In addition, there was a blockage in the leg veins. 9.5 cm is a very rare situation we encounter ”. 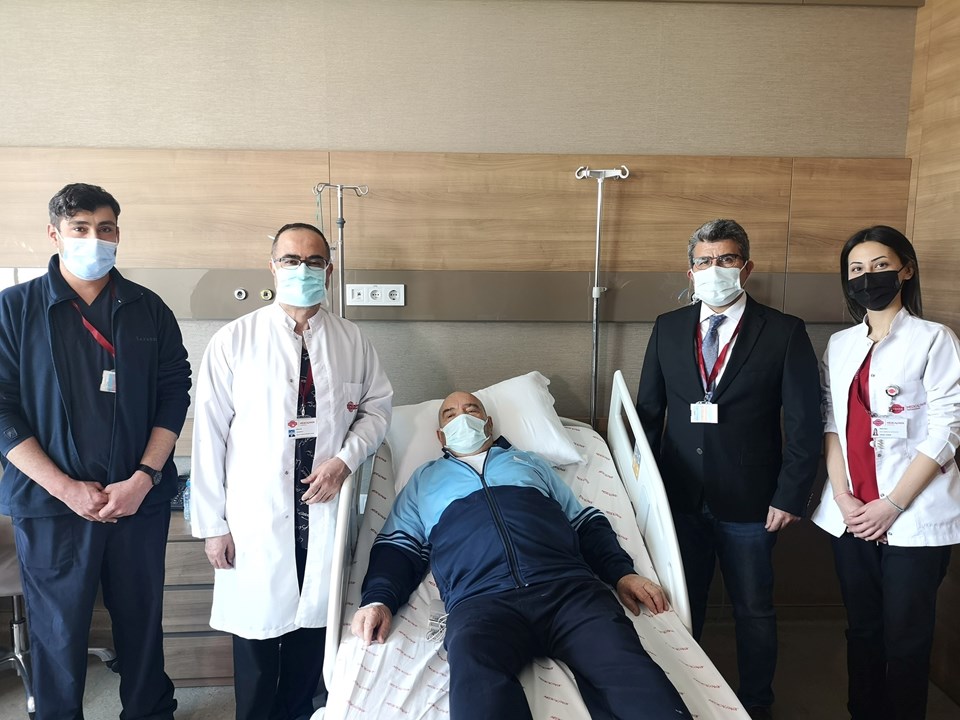 “WE RECOMMEND ULTRASOUND CONTROL ONCE A YEAR”

Stating that this disease is very insidious, Assoc. Dr. Erdoğan continued as follows:

“It may not cause any symptoms in most patients. Sometimes an abdominal pain and similar symptoms can be seen, but the biggest problem here is the rupture of the aneurysm, the first complaint of the patient. In case of a rupture, most patients usually die before reaching the hospital. Patients who can reach the hospital may also have to undergo a very risky surgery, which can lead to a very problematic process. It was also a big risk that he did not have any complaints and that the aneurysm was so large. If there are risk factors, we recommend an ultrasound check-up once a year for all patients over the age of 50 with a long-term smoking history, a history of sudden death in the family, a history of bypass, which we call coronary artery, and diabetes. They can do these by applying to their physician. “

“WEAK PATIENTS CAN MAKE A DIFFERENCE EVEN FROM THE OUTSIDE”

Explaining that they found the veins from both groin areas and closed this aneurysm from the inside with a special technique, Assoc. Dr. Drawing attention to risk factors, Erdogan made the following warnings:

“I definitely recommend quitting smoking. People who smoke for a long time must also have their periodic checks. Diabetes patients, on the other hand, should definitely have their intermittent checks if there is a sudden death picture related to the heart in their family. Our patient did not realize he was very overweight. But when weak patients put their hands on their bellies, they notice a thumping mass there. In this way, we can detect most patients during the examination. In some very weak patients, it can be seen that the mass beats even from the outside. Therefore, one should develop his / her awareness on this issue and take such situations seriously. ”

Important points in the treatment of artery occlusion