Right jaw covering the giant tumor, surgery should be urgently began to clog the airways to university students Tuncay Topçu, Turkey’s first “virtual surgery” was performed by the computer jaw design. After the removal of the tumor in a virtual environment by Istanbul Sultan Abdülhamid Han Training and Research Hospital, Maxillofacial Surgery specialists, Topçu was taken into a real operation after this digitally designed surgery and the operation, which normally takes 12 hours, was reduced to 6 hours. Moreover, since the part taken from the leg bone was designed in advance, it adapted exactly and there was no surprise during the surgery.

University student Tuncay Topçu (23) went to the doctor in September with a numbness in her lip. A neurological problem was not found in Topçu, who applied to the neurology department for facial paralysis. Then, a tiny lesion was detected in the jaw imaging of the young student who appeared to the dentist, and the diagnosis of “ossified fibroma”, a rare and benign tumor, was made as a result of biopsy.

The disease, which started with a tiny numbness on the lips, progressed rapidly within a few months and covered almost the entire right face of Topçu. When the tumor, including three teeth in his lower jaw, enlarged to the extent that it obstructed the airway, surgery was urgently planned. However, the jawbone had to be reconstructed with reconstruction. first time in Turkey, preoperative prepared on the computer “virtual surgery” with exactly the jaw bone was made three-dimensional digital design, was removed as a virtual first region where the tumor is and was designed with a piece of bone to be replaced in one to one computing environment measure was taken to younger patients surgery. No problem was experienced as the part taken from the fibula bone and placed in the jaw with the measurements after the virtual surgery perfectly matched, the operation time, which normally takes 12 hours, was completed in 6 hours by halving thanks to this previously made design. 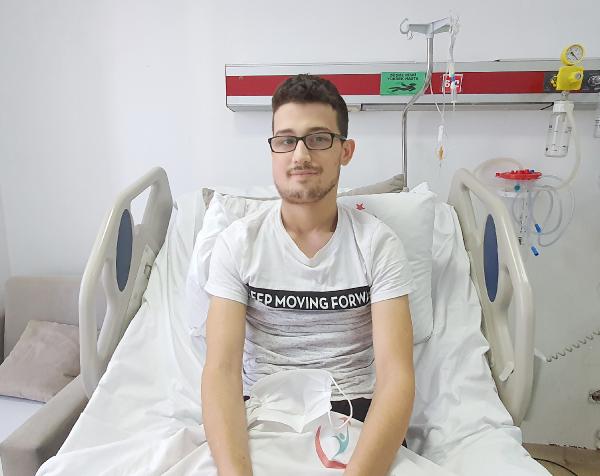 “THE JAW SHOULD BE RESTORED AFTER SUCH A LARGE TUMOR”

Professor of Oral and Maxillofacial Surgery, Health Sciences University Istanbul Sultan Abdülhamid Han Training and Research Hospital. Dr. Celal Çandırlı and Exp. Dr. It was stated that the post-operative swelling on the face of Tuncay Topçu, a student of the Department of Public Relations of Sakarya University, who will have a new face with first virtual surgery and then real surgery by İlker Burgaz, will return to normal within a few months. Providing information about the operation, Prof. Dr. Çandırlı summarized the process as follows: “Our patient came to us with a rapidly growing swelling on his chin in a short time. Radiological examinations and biopsy revealed a benign (benign) tumor in the jaw. But the tumor was so big that he had trouble breathing. He could not open his mouth anyway. There was rapid growth in a short time. It was an aggressive tumor. Of course, we had to have it surgically removed, but after such a large tumor was removed, reconstruction would be required. The gold standard for reconstruction is bone reconstruction. This is not so much an operation conducted in Turkey. We took a piece of fibula bone with the vascular structure from the foot and mounted it to the chin. However, in order for the large bone to remain alive in its new place, we have performed microsurgery anastomoses with the veins in the neck region and the bone vessels. “ 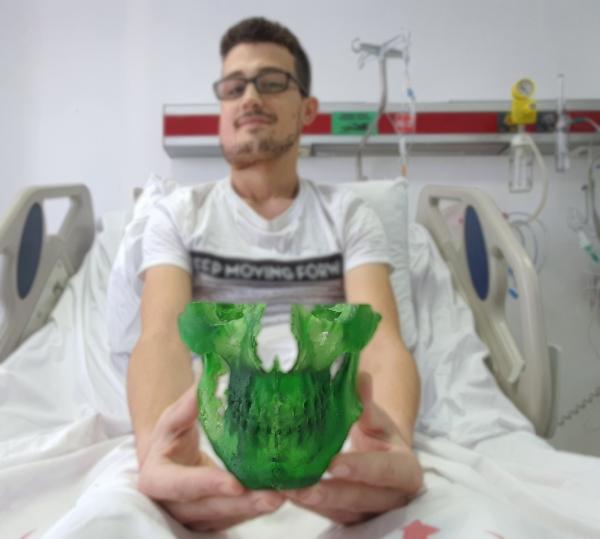 Adding that Topçu will have a normal chin appearance in a short time, Prof. Dr. Çandırlı stated that ossified fibroma is not actually a common tumor and said, “It is not that aggressive either. But our patient grew a lot in a very short time. It is a tumor with a genetic background. Of course, even obstructing the respiratory tract required emergency treatment. The tumor had grown from the front teeth in the lower jaw to almost the upper jaw joint. We performed virtual surgery for the first time in this surgery. In other words, we planned the surgery itself in computer environment before the operation. We determined the incision lines. We transferred the template we created according to that incision line measurement to the foot bone, that is, the fibula. Then we took the original bone-sized fibula and reconstructed the jaw joint. “Our aim here was to reduce the operation time and to provide the original bone integrity. 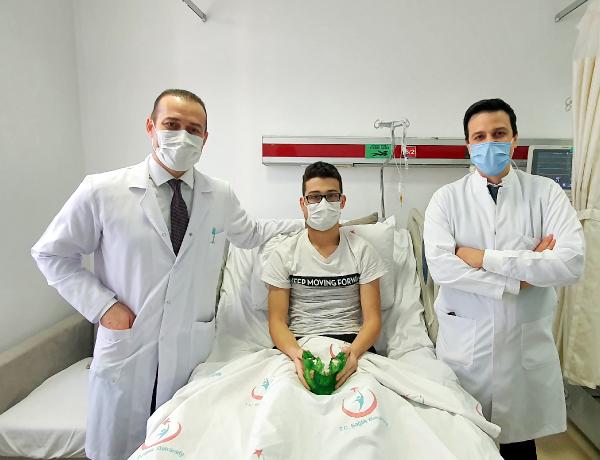 “DESIGN ACCORDING TO THE ANATOMY OF SINGLE PATIENT”

After designing the exact image of the patient’s jawbone tumor in a virtual environment, Dr. İlker Burgaz gave the following information: “We used to reconstruct the jawbone in the past. However, since we did not use virtual surgery, we designed the whole planning within the surgery. This caused loss of time and prolongation of the surgery. In this patient, we performed this process by planning virtual surgery in computer environment for the first time. This was because the tumor was very large and we needed to reconstruct the jawbone in accordance with our patient’s own anatomy. We had the chance to obtain a three-dimensional model in our virtual environment planning and examine it in more detail clinically. The tumor covered almost half of our patient’s jaw. It was spread over almost all of its right side. The biggest advantage of using this technology for us was that it shortened the duration of the operation and we were able to perform a reconstruction operation in accordance with the anatomy of the patient. Since everything is planned in advance, we have minimized surgical surprises. This lowered the risk of complications. “

“MY JAW RECORDED TEETH ARE DAMAGED”

Sakarya University Public Relations Student Tuncay Topçu said that his illness started with numbness on a part of his lip 4-5 months ago and explained his process as follows: “In a small part of it, numbness started. I went to neurology because lip numbness can be a symptom of facial paralysis. Neurology said there was no facial paralysis. I went to the dentist and noticed a flat lesion on the x-ray. He directed him to the maxillofacial surgeon Sakarya Oral and Dental Health Hospital. Tomography MRI and biopsy was performed and at that time it turned out to be a benign tumor. But until the surgery, the tumor was more and more swollen every day. I have become unable to eat. My jaw slipped, inside my back teeth were bent. I could only drink soup. I could not sleep, I was having enough pain to wake up in the middle of the night. I was taking 4-5 painkillers a day. I am relieved now that I can eat now. There is no problem in my foot where the bone was removed. My chin is also gradually improving, and my face will return to its original state when the swelling is completely reduced. “

“It is seen in babies with frequent infections”

How is obesity treated in children? Ways to prevent weight gain in children!

“Women turned towards medical aesthetics against signs of aging”

Adolescence during the epidemic: they cling to the screen

“Those who have trouble sleeping, don’t check your night time”