The seriously ill was 1474, the number of people recovering from the end of the Covid-19 treatment / quarantine of 17 thousand 893 people increased to 2 million 734 thousand 862.

When the weekly case table announced by Health Minister Fahrettin Koca is examined, the increase is remarkable.

5 PROVINCES WITH THE MOST CASE

The highest number of cases in the past week was again seen in Samsun.

The increase of the case did not slow down in Samsun, which displayed a frightening picture with the number 348 on the map containing the data of 27 February-5 March.

This week, corona virus was found in 458 of 100 thousand people in Samsun.

AT LEAST CASE IN THESE PROVINCES

The provinces with the least number of cases were Siirt, Şırnak, Hakkari, Şanlıurfa and Batman, respectively.

In Siirt, which has demonstrated a successful fight in the last week in the fight against the epidemic, corona virus was found in 2 out of 100 thousand people.

The highest increase in the three metropolitan cities was again seen in Istanbul. 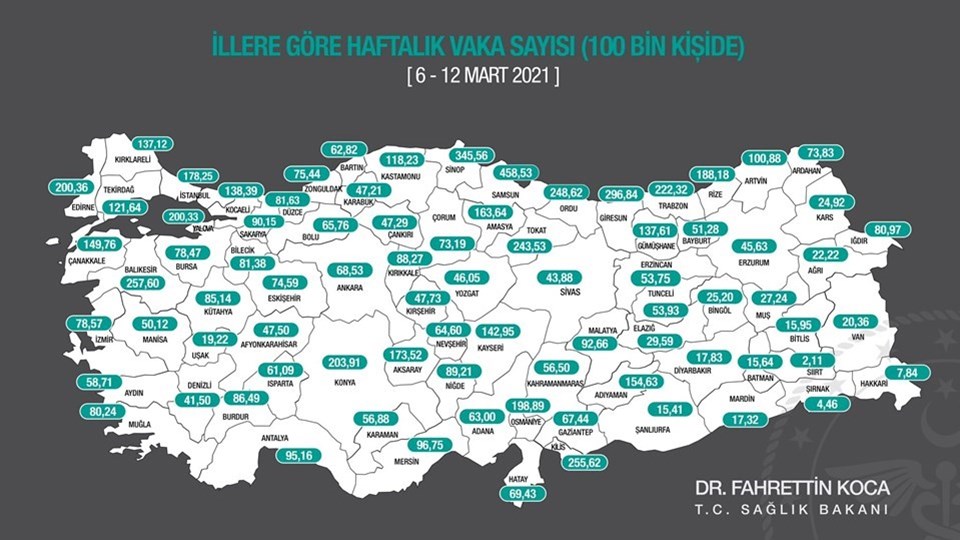 In the statement made after the highly anticipated cabinet meeting yesterday, it was announced that the current normalization practice will continue for a while.

President Erdoğan said, “With the first excitement of the new normalization, I think you did not pay enough attention to obeying the rules.”

Agreement signed for the production of Sputnik V in Italy

What should we pay attention to for prevention from cancer? What are the main measures to be taken to prevent cancer?

Have we become a mutation paradise | NTV

Silver filling is the most reliable method in dental treatment

Colic can be the cause of infant migraine

Istanbul Governor Yerlikaya: The vaccination rate of over 65 years old is 68 percent.