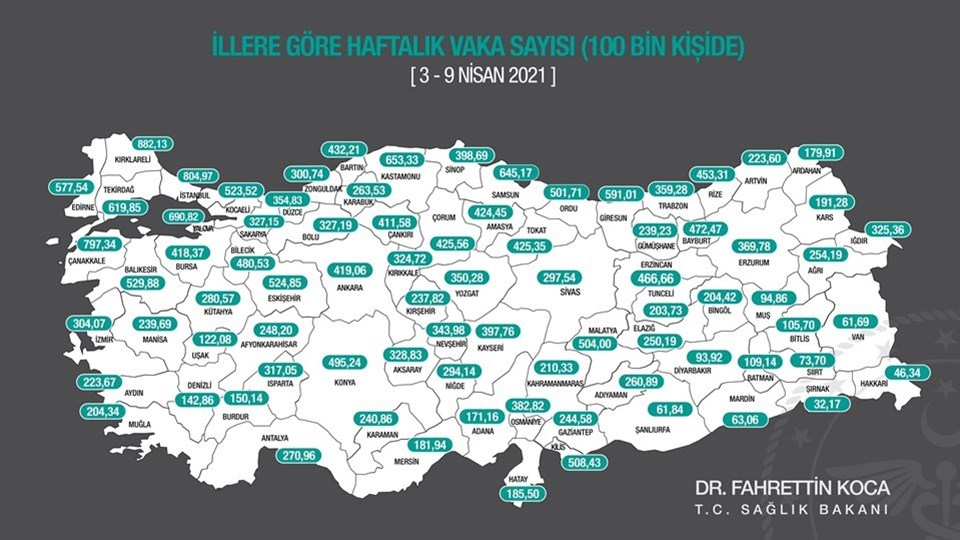 Since the start of controlled normalization, the increasing number of cases continues to be reflected in both daily and weekly tables.

Kirklareli Province rose to the first place in the weekly number of cases. The number of cases in the city has increased approximately 17 times since February 8.

One of the striking points on the map was the passing of Samsun to Istanbul, which attracted attention with the number of cases during the controlled normalization period.

CanakkaleIn ‘, it rose to third place in the weekly case number. The number of cases in the city has increased 21 times since February 8.

Head of Kırklareli Medical Chamber, Training and Research Hospital General Surgery Specialist Op. Dr. Taner Pehlivandrew attention to the dynamism in the region rather than the province.

Pehlivan, ” When we look at our neighboring provinces such as Istanbul and Tekirdağ, we see that they have high number of cases. “ When the Marmara Region has provinces with very high contact within itself, this affects the number of cases. ”

Mentioning that the main problem is in the working areas in the province, Pehlivan said, “The population of workers is very high especially in Lüleburgaz, which is an industrial zone. When we look at it, we see that our hospital in Lüleburgaz is mostly full. ”

Pehlivan continued his words as follows:

” Our working population in Çerkezköy, Çorlu and Kapaklı regions is quite high. Some of these employees reside in Kırklareli. He commutes to work every day with a shuttle service. This is a factor in the increase in the number of cases. At the beginning of this rapid increase period, our first cases came from these industrial zones. Then the disease spread through domestic contamination. ”

Infectious Diseases and Clinical Microbiology Specialist Prof. Dr. Leader ErgönülHe stated that Istanbul is a lively city especially in terms of working population. According to Ergönül, who says that the movement is more than other cities due to the abundant production and the high working population, this situation affects the increase of cases considerably.

Ergönül, ” At the moment Turkey, in terms of the number of patients per day, 100 thousand is placed in one of the countries with the highest position in the world of new patients. European level in the second closest country to Turkey, Sweden and France third, ” gave the information.

“ WE WERE EXPECTING TIGHTENER MEASURES ”

Turkey will begin this evening as well for Ramadan restrictions Ergönül engaged in the evaluation, ” We were expecting to be more stringent measures. This was the best time to take drastic measures. The upward climb is still continuing at the moment. We can call this climb the 3rd wave. We should take measures to put out the fire as soon as possible. ”

Saying that the first reason is that the variant virus has become quite dominant in the city, Şener said, “ We are faced with the variants of England, Brazil and South Africa. We predominantly see these variants in the field, ” he said, listing other reasons as follows:

“As the second reason, although Çanakkale is not seen as an industrial zone, we see that there is a lot of contact especially at the workers’ services of the factories in Çan and Biga. When contact is made in the service, individuals then go to their homes and spread like a drop falling on the water.

” NATION IS GOING WITH ITS CHAIR ”

Another reason is related to sociological human behavior. The people of Çanakkale are warm-blooded people and do not like staying at home. They are always in an outdoor activity in the city. Although everywhere is closed, there are two cords in Çanakkale. Although the cafes are closed here, the folks take their seats and go to sit. Even if it is an open area, the risk of gathering more than 6 people increases considerably. These gatherings could not be prevented in the city.

Providing information about the hospital occupancy rate in Çanakkale, Şener said, “We are currently experiencing problems in intensive care and service admission. Çanakkale’s bed capacity seems high on paper. However, you must have enough employees to be able to use all of these beds. For example, you have 100 beds, but there are no personnel to activate your 100 beds. With this professionalism, it does not make sense to have a lot of beds on paper even when you are not staffed. ”

Corona virus party at the hotel

Big trick on olives! They also did this

The question in mind: When will the pandemic end? – Health News

Full closure warning from professor: he cited 3 countries as an example – Health News

The fear of coronavirus has increased the problem of clenching and grinding teeth!